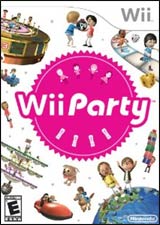 Wii Party is a party game developed by Nintendo for the Wii gaming console. The game is an evolution in the party game genre, in which along with standard Wii party game action beloved by gamers, players use the Wii Remote in new ways that encourage player interaction in the physical gameplay space, affecting in-game action. The game features more than 70 party games, broken into multiple game categories, 1-4 player game support and new and fun ways to integrate Miis into your gameplay.

Most video games require players to focus their attention on a screen, but now Nintendo brings the action into the living room with Wii Party, a game that changes the way people interact with other players.

Wii Party is a family-friendly party game featuring 13 different party game modes and 70+ mini-games. Individual games are diverse in design, incorporate importable or system generated Miis, and fall into several different categories. These include: Party Games supporting 1-4 players that in some cases utilize an in-game game board, navigated with the use of Miis and dice rolls; Pair Games, supporting up to two players in co-op play; and House Party Games, which support 2-4 live players and utilize the Wii Remote to create differing dynamics between players.