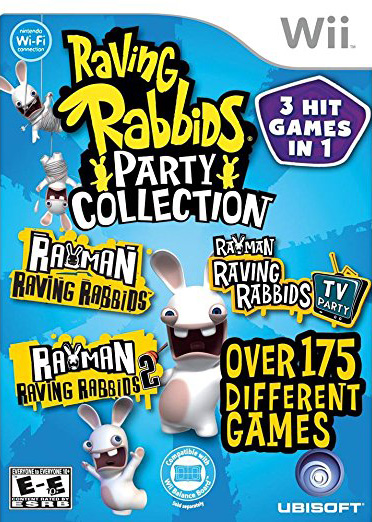 Rayman Raving Rabbids - Rayman Raving Rabbids marks the return of the iconic video-game hero, Rayman, in his funniest and zaniest adventure ever. When the world of Rayman is threatened by a devastating invasion of crazed, out-of-control bunnies Rayman must rise up against his furry foes to foil their wicked plans. Utilizing an array of amazing new abilities, and with the help of magical creatures, Rayman must break out all the moves to save his world from these delirious bunnies and their hare-raising antics.

Combat the Ultra-Crazed Evil Rabbits - Take control of Rayman and his knack for attack to help save his world from the raving rabbids. They are mischievous, insane and completely out of control. There are several types of rabbids each with its own mischievous characteristics. Tame and control various creatures such as sharks, eagles, rhinos, spiders and angelfish. Rayman can master each animal's unique capabilities to help in his battle against the devious rabbits. Customize and disguise Rayman. Go punk, pop, rock or hip hop to infiltrate the bunnies and foil their devious plans. Explore amazing free-roaming environments and beautiful epic landscapes that mix real and fantastical styles to create a visually stunning experience.

Rayman Raving Rabbids 2 - They've invaded the world of Rayman, and now the insane Rabbids have a new objective: invade planet Earth! They have established their base at a shopping mall and begun training for their nastiest scheme yet. As part of this training, the Rabbids must carry out several missions around the globe to help them in an attempt to dominate the world. The Rabbids will also try to study human behavior by mimicking everything we do... but in the Rabbid sort of way, with no logic... of course.

Rayman Raving Rabbids: TV Party - Join the rabbids in the wackiest TV party ever! Play over 50 hilarious games to get the rabbids out of your TV - including the first game you can play with your butt on the Wii Balance Board! Monster truck race, surf through space, and dance with those wacky rabbids and up to seven friends in the craziest party game ever. Up to 4 players simultaneously and 8 players alternating.