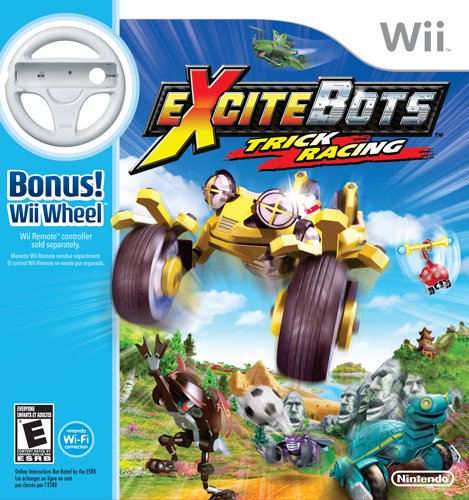 The fourth game in the Excitebike series, and the second on the Wii platform, ExciteBots: Trick Racing is an evolution in the racing genre. Featuring big-air thrills, pick-up-and-play controls, exciting multiplayer action and a dozen funky bot racers in the form of mechanical insects, amphibians, and mammals that transform throughout the race, it isn't like any other racing game you have played. Jump into the driver's seat and see the world in ExciteBots: Trick Racing.

In ExciteBots: Trick Racing players race around internationally located tracks in the form of their favorite insect, amphibian or mammal themed bot. Each bot has its own special abilities which will serve players well when they find themselves on the right terrain to take advantage of these. As with pretty much any racing game, a major goal is to complete the course at the highest speed possible, but players are also tasked with performing stunts and participating in mini-games. Players win bonus stars for crossing the finish line sooner, but stunts, style and these mini-games are as important as speed. For example: have you ever wished that you could play poker while racing? Think you can toss a dart or roll a bowling ball while leaving the competition in the dust? ExciteBots provides you with your chance. Stars can be traded for a variety of goodies, like new vehicles, tracks, icons and statues.

The control scheme of ExciteBots is easy and fun. The game can be played with just a Wii Remote or via the combination of a Wii Remote and a Nintendo Wheel accessory/any third party wheel. The 2 Button on the Wii Remote controller is the gas. The + control pad gives drivers a speed boost. Players turn the Wii Wheel accessory left or right to steer, tilt the Wii Wheel in midair to glide or to adjust pitch for perfect landings, swing the Wii Wheel in circular motions around boost bars to build up speed and press the A Button to activate items or to cash in hands in Poker Mode.