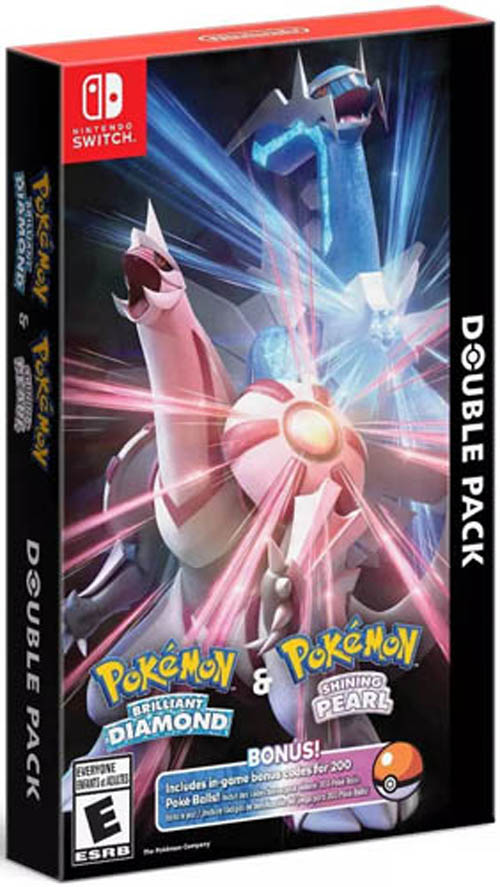 Experience the nostalgic story from the Pokйmon™ Diamond Version and the Pokйmon™ Pearl Version games in a reimagined adventure, Pokйmon Brilliant Diamond and Pokйmon Shining Pearl, now on the Nintendo Switch™ system! Adventures in the Pokйmon Brilliant Diamond and Pokйmon Shining Pearl games will take place in the familiar Sinnoh region. Rich in nature and with mighty Mount Coronet at its heart, Sinnoh is a land of many myths passed down through the ages. You’ll choose either Turtwig, Chimchar, or Piplup to be your first partner Pokйmon and then set off on your journey to become the Champion of the Pokйmon League. Along the way, you’ll run into the mysterious organization Team Galactic, and be able to encounter the Legendary Pokйmon Dialga or Palkia.

Walk with your Pokйmon, change up your style, and customize your Pokй Balls

Choose a Pokйmon that you’ve befriended during your journey to walk along behind you in the games. In the relaxing Amity Square you can walk with up to 6 Pokйmon! Depending on the Pokйmon, you’ll see different gestures or ways of walking, and when you talk to your Pokйmon, it will respond. You’ll also be able to add your own personal style! Choose a variety of outfits and coordinate tops and bottoms. Some are based around Pokйmon motifs and others change your hairstyle. You can even use Capsule Decoration to add stickers to customize the effects that appear when your Pokйmon comes out of its Pokй BallTM!

Adventure together with the Pokйmon that appeared in the Pokйmon Diamond Version and Pokйmon Pearl Version games. Players of the original games can revisit familiar places and relive familiar scenes, while first time players can enjoy plenty of fun encounters and surprises that the Sinnoh region has to offer. The original story and the scale of the Sinnoh region’s towns and routes have been faithfully reproduced. These remakes have also been revitalized with some of the player-friendly features of modern Pokйmon games and up-close-and-personal Pokйmon battle scenes.

Returning from Pokйmon Diamond Version and Pokйmon Pearl Version are Poffins, snacks that can raise Pokйmon’s conditions, such as Coolness or Cuteness. By raising these conditions, you can get higher scores during the Visual Evaluation of Super Contest Shows. Not only can you make Poffins in the Poffin House, but also in Amity Square where your Pokйmon will help out.

Early in your journey you’ll receive the Pokйtch, a handy in-game gadget that’s loaded up with various apps. As you proceed through your adventure, you’ll get more and more apps to use, like the Dowsing Machine to help find hidden items and the Memo Pad. The Pokйtch also allows you to call on wild Pokйmon to help you out. They’ll use hidden moves like Cut to chop down trees that block your way, or Rock Climb to scale steep cliffs.

Unravel the plot of the mysterious Team Galactic as you work towards becoming the next Pokйmon League Champion. Their leader is Cyrus, a charismatic figure who always speaks and acts with a calm, logical demeanor. He detests human minds and emotions, finding them defective. Find out what Team Galactic is up to and take down their leader.

Whether you played Pokйmon Diamond Version or Pokйmon Pearl Version back in the day or you’re encountering these games for the first time, there’s something for everyone to enjoy.