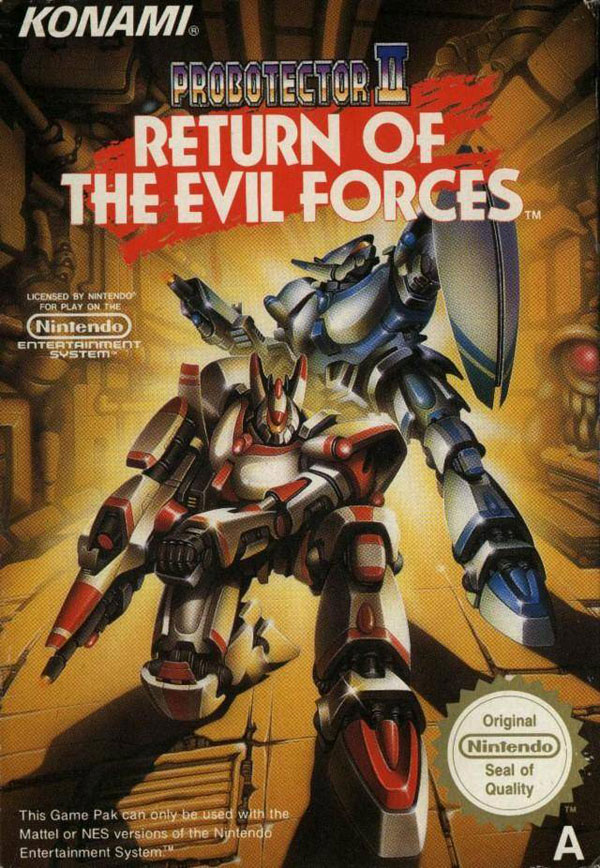 Region: PAL A - Probotector 2 Return of the Evil Forces is not compatible with US Nintendo/NES system and is compatible only with NES/Nintendo console released in UK, Italy and Australia.

After losing a confrontation against Super Commandos Mad Dog and Scorpion, the juices of destruction drip from the spiked tongue of the vile alien warmonger - Red Falcon. Now, he's coming back stronger than ever, with a sinister plan that includes having his intergalactic warriors seep into the brains of the U.S. Army.

To support his disguised forces of doom, he's recruited Jagger Froid, a demented alien from the Black Hole Galaxy. He's also shuttled in The Babula Destructoid Mechanism with its Beam of Death. With torrential terror about to rain down upon civilization, Earth's only hope rests with you, Scorpion, and your pal, the Dogster. And if your spread guns, lasers, flame throwers and mega shells fail to destroy Red Falcon's eight levels of terror, including radioactive lava fields, it's all over but for the shouting, the screaming and the cries from a disintegrating world!