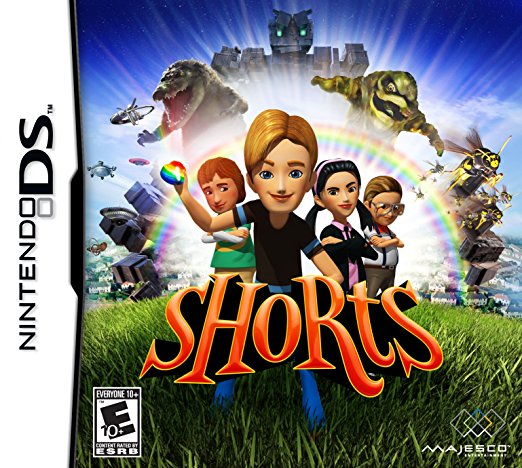 In Shorts, a magical rainbow rock that grants wishes brings chaos to the peaceful suburbs. Players take on the role of four of their favorite characters from the movie-Toe Thompson, Nose Noseworthy, Loogie Short and Helvetica Black-as they work to return the community of Black Falls to normalcy by fixing wishes-gone-wrong. Each character has his own special jump and unique ability that helps when fighting off a multitude of enemies, including booger monsters, bomb shooting crocodiles, poison spitting snakes, bats and sparking robots!

Shorts features 26 levels in three distinct episodes from the feature film. Players can use the stylus to draw temporary platforms to jump on or use as shields to avoid dangerous threats. In addition, collecting enough energy balls lets gamers power special abilities like the alien and wasp hover-jumps, telekinesis super-attack, invincibility, and growth and shrink ray guns for extra sticky situations!