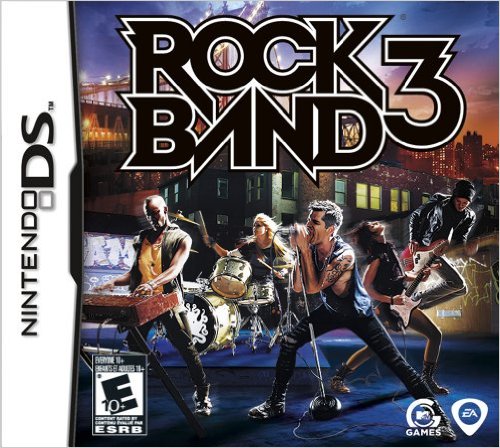 Rock Band 3 for Nintendo DS and DSi is the second release in the iconic Rock Band video game series for play on the Nintendo DS. Like the earlier, LEGO Rock Band, Rock Band 3 challenges DS players to take their Rock & Roll fantasies in hand, playing in a band scenario both in single player and multiplayer modes. Unlike other music simulation games developed for the DS, Rock Band 3 does not require an additional peripheral, instead utilizing DS touchscreen technology to bring addictive Rock Band Note Highway gameplay to life. The game features a series of exciting play modes, an engaging track list and 4-player multi-card support via a Nintendo WI-Fi connection.

Rock Band 3 for DS allows players to experience the ins and out of band life, whether you are playing by yourself, or with friends. In single player action players create their band then run through tunes, tapping out prompts on the the familiar Rock Band Note Highway, with the goal being to complete songs as a unit. The lower screen of the DS shows the Note Highway, while the upper shows a representation of the player/bandmate(s). Players can only control one instrument at a time, but the DS provides AI bandmates in this case. If an AI bandmate stumbles the player can hear the notes missed and see a representation of the slumping bandmate. If the AI character is in jeopardy of being booed off the stage, the player can switch to that instrument with the touch of a bumper to take over and attempt to save the song.

The game also features 4-player Nintendo multi-card wireless support. This enables up to four player, all with a game copy, to come together in local play, each trying their hand at a different instrument, search out a manager, gigs and to eventually wow their fans. Instruments available in-game include: guitar, bass, drums, vocals and keyboards.