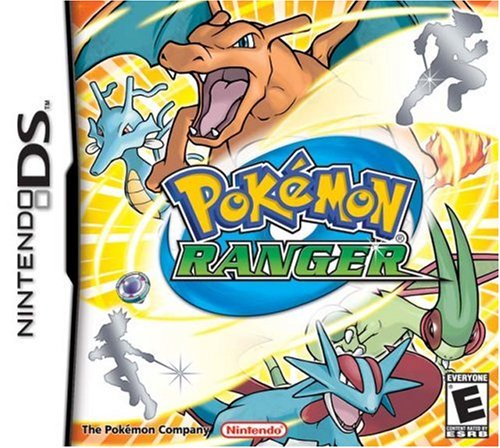 With the help of Pokemon, set out on a fun-filled adventure! You play as a Pokemon Ranger in the Fiore Region, where you work to preserve nature and protect Pokemon.

Pokemon Ranger is unlike any Pokemon game you've played before. You control your character using the stylus, and all Pokemon are captured using a Capture Styler instead of a Poke Ball. Since you're a Pokemon Ranger and not a trainer, you must release each captured Pokemon back into the wild after they help you. It's a whole new way to explore the Pokemon universe!

The Capture Styler is the tool a Pokemon Ranger uses to capture Pokemon in the wild. When you touch a wild Pokemon, a battle begins. Using your stylus, you must circle the wild Pokemon a set number of times to capture it. Sounds easy, right? Wrong! Most Pokemon won't be captured without a fight.

Some Pokemon are so difficult to capture that you'll need to call on the help of Pokemon you've already captured. This is called a Poke Assist. When you execute a Poke Assist, the helper Pokemon’s power is transferred to your Capture Styler and provides assistance in a number of ways.

If you place a Grass-group Pokemon in the Capture Styler, for example, your Capture Line will cause grass to grow, which could slow down a fast-moving Pokemon. Another example is the Fighting Poke Assist, which doubles the strength of your Capture Line. In all, there are 15 different types of Poke Assists to use to your advantage.

Once you use a Pokemon in a Poke Assist, that Pokemon is then set free.

As a Pokemon Ranger, you'll encounter many obstacles while completing missions throughout Fiore. You can use the Pokemon you've captured to help you overcome these obstacles by using the special powers of your Pokemon friends.

Most Pokemon in the game have powerful abilities called Field Moves. Field Moves are used to smash boulders, burn objects, or complete a variety of other tasks. If there is bundled hay in your path, for example, you could call on Torchic to lend a hand. Just use your stylus to draw a line from Torchic to the hay, and Torchic will use its special ability to set the hay on the fire.

Like a Poke Assist, you'll have to set a Pokemon free after it uses a Field Move to help you.

Pokemon Ranger features a great storyline and a wide variety of missions to complete. It's a lot of fun to capture Pokemon using the Capture Styler, and you'll have to experiment with different Poke Assists to secure the Pokemon that are more difficult to capture. Becoming a Pokemon Ranger is a new experience that will be a blast for any Pokemon fan.