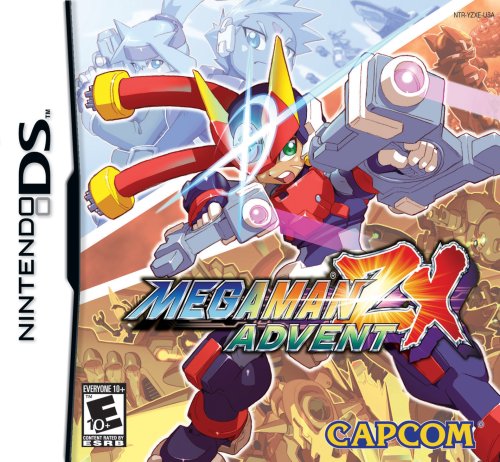 Developed as a title for Mega Man's 20th anniversary, Mega Man ZX Advent is a fast-paced action game that follows two heroes, Grey and Ash, on two separate but intertwining adventures as they search for answers amidst a chaotic war between humans and robots. As a flagship franchise for Capcom, the Mega Man series has garnered sales in excess of 26 millions units worldwide and has generated more than 100 titles, the most of any Capcom series.

In Mega Man ZX Advent, the main characters discover the power of the mysterious "Biometal model A," which on its own has several attacks, but also has a special Megamerge ability which allows the character to transform into one of eight "Pseudoroid" bosses that each have a unique set of abilities. Once a boss is defeated, players can emulate their powers to find hidden routes, discover rare items and aid their battles against more powerful enemies.

The title takes full advantage of the Nintendo DS features to enhance the action-packed gameplay and story line of the popular series. With a touch of the Nintendo DS screen, players can easily switch back and forth between the Biometal and Map navigation screens. Bosses can be fought in several different ways, testing players' skills and rewarding them with nearly 24 different items depending on how they take on a boss. Further gameplay options are available as players explore and open up new areas of the map.