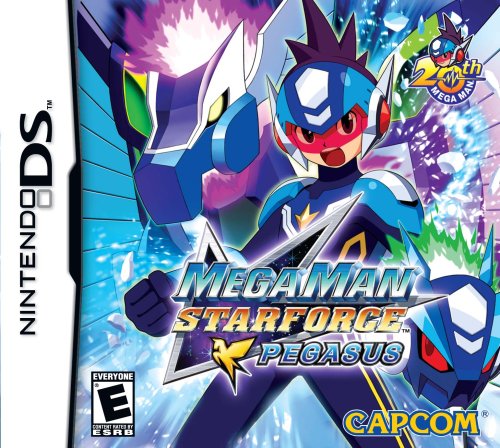 Mega Man Star Force for the Nintendo DS is the first game in a new Mega Man series making its debut in three versions – Pegasus, Leo and Dragon , a first for any Mega Man title. This action RPG blends exploration with fast-paced battles, as players travel between real world and virtual "Wave World." Developed by the team behind the popular Mega Man Battle Network series, the game marks the start of a new era for Mega Man, which celebrates his 20th anniversary this year. To date, the Mega Man series has generated more than 100 titles, the most of any Capcom title, with sales of more than 26 million units worldwide.

In Mega Man Star Force, players explore towns and interact with people in the real world while the action-packed battles take place in the virtual "Wave World." Enemy encounters take place on a three by five grid in a 3D perspective, where players use a portfolio of Battle Cards that each have distinct attributes and attack powers. As the story progresses, players will acquire additional cards to build an arsenal that reflects their personal strategy. Players can also connect wirelessly via the Nintendo Wi-Fi connection with friends to create a Brother Band network, where they can share cards and get status upgrades.