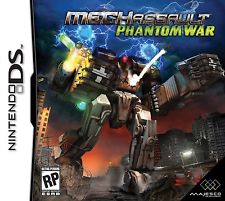 Piloting giant walking robots in combat requires years of training, lightning-quick reflexes, and nerves of steel. But in gamers' cases, it'll just require ample control of a DS stylus. Details have been released about MechAssault: Phantom War, which makes its way to the DS later this year.

The third-person shooter is currently in development by Backbone Entertainment, a division of Foundation 9 Entertainment. The top screen will show the traditional third-person view of the action, and the bottom screen will show the inside of the combat, complete with battle mech controls. Using the stylus, gamers will be able to hack mechs, eject themselves, and switch weapons.

The single-player mode features 24 campaigns spanning four planets, and wireless multiplayer allows up to four players to compete in three different modes. Twenty types of vehicles will be included in the game, such as battle mechs, tanks, and battle armor.