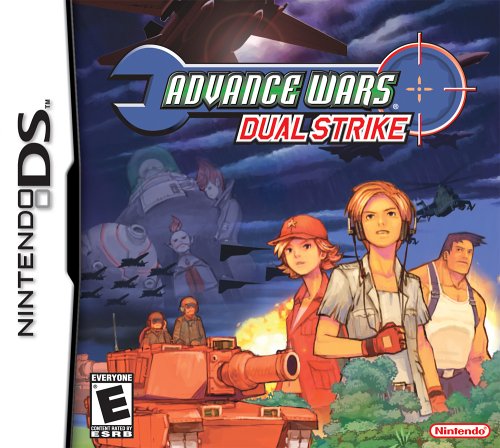 Advance Wars, the award-winning turn-based strategy game, makes its debut on the Nintendo DS. Players lead their new Commanding Officers to fend off the Black Hole Army’s latest invasion. With massive battles that sweep across both of the DS screens, Advance Wars: Dual Strike will change the face of war forever.

On the heels of its last defeat, the nefarious Black Hole Army has fallen under the control of a deadly new commanding officer. He has sent its new COs to attack the nations of Wars World once again, and it’s up to the allied armies of Orange Star, Blue Moon, Yellow Comet and Green Earth to put an end to Black Hole once and for all.

Advance Wars: Dual Strike uses both screens: the touch screen for battles and the top screen for special information, from unit and terrain details to special conditions in each battle. In special DS Battles, players fight on the top screen as well, commanding both battles and redeploying units from one screen to the other.

Each time Commanding Officers win a battle, they gain experience – over time, they can learn new battle skills that increase their strengths or boost a unit’s abilities. There are more than 40 battle skills. Each of the COs has two separate special powers: a CO Power and a Super CO Power. These powers can freeze the battlefield, boost the attack range, rain bombs on enemies and much more.

5. Final Fantasy Tactics A2: Grimoire of the Rift (Nintendo DS)