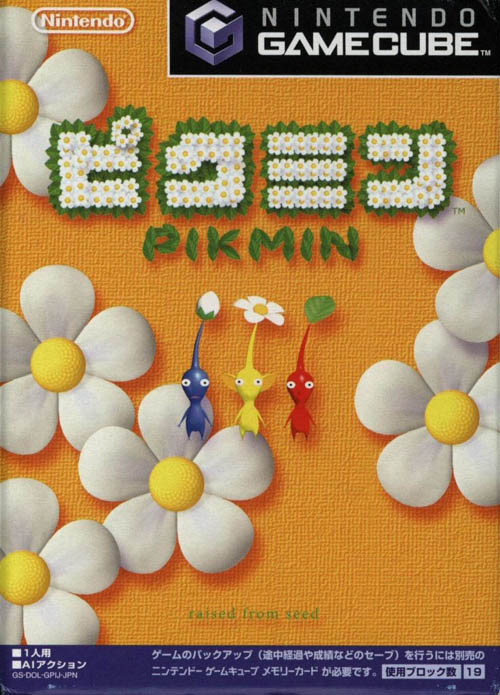 Pikmin imported versions can be played on US Nintendo Gamecubesystems using a Dreamcast boot disc.

Straight from the creative mind of Nintendo's own Shigeru Miyamoto (the creator of Mario, Zelda, Donkey Kong and more), Pikmin is an inventive new kind of game perfectly suited to SHOW off Nintendo GameCube's awesome potential.Referred to as an "inventive life simulation," Pikmin is an action-strategy game featuring incredibly life-like environments inspired by Mr. Miyamoto's own garden in Kyoto, Japan. Players control a spaceman named Captain Olimar who has crash-landed on an unusual planet. The goal of the game is to help Olimar collect his vessel's lost parts, which have been scattered all over the planet.Luckily for Captain Olimar, the planet is inhabited by strange little creatures called Pikmin. Pikmin are plant-like life forms that come in three different colors: red, yellow and blue. Each type of Pikmin has unique strengths which Olimar must use to his advantage. Red Pikmin can withstand fire, blue Pikmin can survive in water, while yellow Pikmin can fly higher and destroy obstacles by using bomb-rocks. Players can control the Pikmin sprouts individually, in groups, or in one large Pikmin posse of 100 creatures.Unlike most strategy games, the basic controls in Pikmin are very simple. Mr. Miyamoto has made excellent use of the new Nintendo GameCube Controller. The main Control Stick controls Captain Olimar, while the C-Stick controls the swarming mass of Pikmin. While you're moving Olimar in one direction, you're free to move the Pikmin in any direction you'd like. Simple one-button action commands are used to control your Pikmin.Gameplay challenges include defeating enemies, solving puzzles and ultimately collecting all of the spaceship parts before Olimar's life-support system runs out. Captain Olimar has a limited number of days to explore the planet's wide range of environments. Each day is monitored by a constantly moving sun meter at the top of the screen. You have to make sure to complete your tasks and gather your stray Pikmin before the sun goes down, or they'll fall prey to the planet's nocturnal natural predators.To produce new Pikmin, you have to defeat enemies and carry them back to the Pikmin nests, called onions. If you want to make more blue Pikmin, command your blue Pikmin to carry defeated enemies and food back to blue onions. If you need red Pikmin, then make sure to assign red Pikmin to carry fallen prey back to home base. Once you get the hang of it, it's not difficult to keep a healthy stock of all types of Pikmin in reserve. You can have up to 100 Pikmin out at the same time, but you can store as many as you'd like in the onions.In addition to the different colors of Pikmin, each Pikmin can be grown INTO three different forms: leaves, buds and flowers. Pikmin begin their lives as leaves, but they mature into buds and flowers if you leave them in the ground after sprouting. Flower Pikmin are stronger and faster than bud and leaf Pikmin.Accomplishing goals in Pikmin isn't all about hauling items FROM point A to point B. Pikmin sprouts can also be directed to perform other tasks like building bridges, destroying walls, carrying bombs and -- of course -- fighting.Directing Pikmin to battle other creatures is one of the most entertaining aspects of the game. The natural enemies are generally many times larger than the Pikmin, so Pikmin have to attack in large numbers to be successful. We learned that it's best to attack most enemies from behind. Otherwise, you'll be serving up a Pikmin buffet that's both horrible and hilarious to watch.The overall artistic direction in Pikmin is what makes it so appealing. A trance-like soundtrack establishes the mood, while Pikmin are blended in a surreal fashion with an otherwise realistic world. These details make Pikmin instantly endearing, but don't make the mistake of thinking this game is simple. Even the most experienced gamer will likely do quite a bit of head-scratching while trying to solve the game's puzzles and defeat fierce bosses. After you've played through it once, you're sure to want to go through again to improve your speed or to challenge yourself to grow and even larger Pikmin army.Pikmin is a totally new type of game which you have to play for yourself to appreciate. Its fresh approach and imaginative presentation makes it one of the most refreshing games we've experienced in a long while.