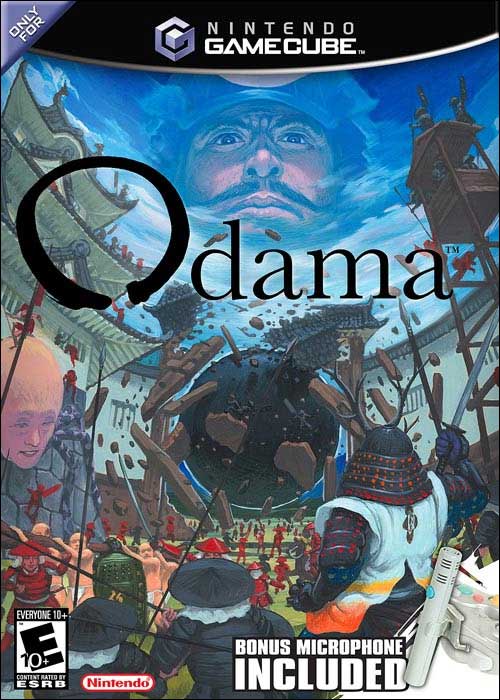 Go medieval on a vast empire by using a brutal technology: A massive pinball.

The legendary general Yamanouchi Kagetora, intent on avenging his father’s death, has devised the most ingenious weapon ever to hit the medieval battlefield: the Odama, a gigantic ball powerful enough to destroy whatever it strikes – friend or foe. Players use the Nintendo GameCube Mic to direct soldiers out of the Odama’s way and into the fray, and prove that they have the skills to back up the power of the Odama.

The main character in Odama is Yamanouchi Kagetora, the general credited with creating the Way of Ninten, a philosophy that puts the greater good above the individual’s needs. With this philosophy to guide him, he finds that his individual soldiers can band together to create a force strong enough to defeat even the most powerful enemy.

When his nemesis, a general named Kendare, kills his father, Kagetora exacts his revenge against a vast army with only 30 soldiers in his command. Kagetora has a secret weapon, however – a legendary weapon called the Odama.

The Odama itself is the most prominent character in the game. This gigantic ball rolls across the battlefield, pulverizing anything in its path – friend or foe. A commander stands guard between the two flippers, hacking down any soldiers who attempt to pass. The army of soldiers carries items for players and obeys their every order.

The L and R buttons control the flippers, which operate exactly like those in any pinball game -- they smack the Odama back into the battlefield, directing it into targets and away from soldiers. Players also can tilt the battlefield, allowing them to alter the course of the Odama once they have hit it into the fray.

Using the Nintendo GameCube Mic, players will direct their soldiers by giving voice commands to them. The goal is to shatter the enemy gates with the Odama and direct a crew of men carrying a giant bell to pass through the opened gates. Players’ soldiers will defend their crew and seize enemy positions to protect the men on their mission.

The Nintendo GameCube Mic is the most important addition to this title. By holding down the X button on the Nintendo GameCube controller, players activate the microphone. There is a vast array of commands that Odama can understand, allowing players to order their soldiers to ford rivers, charge enemies, retreat, line up in formation or defend positions, just to name a few.

What does "Complete" mean?
The buy and sell value of Odama with Microphone (Gamecube) is based on how "complete" it is. When in the "complete" condition this used Gamecube game includes: