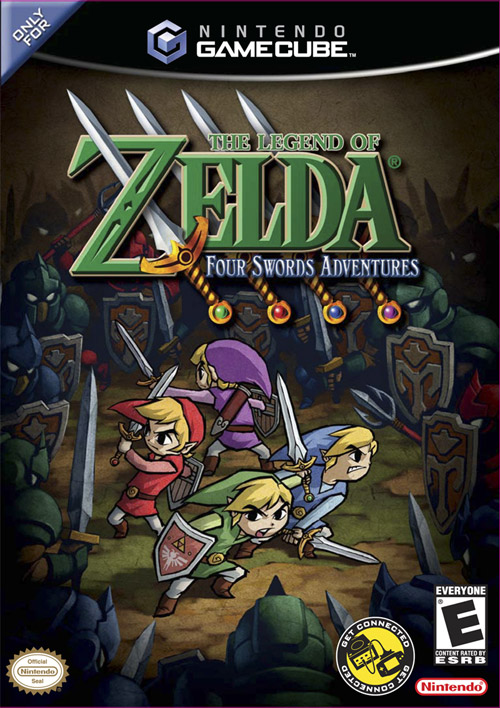 Long ago, a valiant hero defeated an evil wind demon known as Vaati and imprisoned him with a magical seal. Over the ages, the seal weakened. Now, Vaati has escaped and abducted Princess Zelda and the six Shrine Maidens. To thwart Vaati's vile forces, legendary hero Link turns to the mystical power of the Four Sword to split himself into four colored copies of himself. The four Links embark on a quest to collect Force Gems and save Princess Zelda. Their journey will take them through enemy-infested lands and puzzle-plagued dungeons.

The mission seems simple in this four-player competitive Zelda game: collect more Rupees than fellow players. But as players explore a massive world that spans both the Nintendo GameCube and the Game Boy Advance, they must team up to solve puzzles and defeat enemies.

However, cooperative game play can be a daunting task when each person is looking out for number one! Pick up and carry rival players, use the boomerang to steal items, and prepare for heated competition with the countless items and enemies that define the Zelda series.

Nintendo Player's Choice version of Zelda Four Sword does not come with a link cable & artbox.

What does "Complete" mean?
The buy and sell value of Legend of Zelda: Four Swords Adventures (Gamecube) is based on how "complete" it is. When in the "complete" condition this used Gamecube game includes: