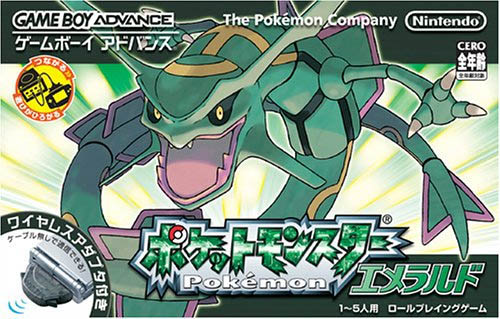 Buy with confidence! All Game Boy Advance games from eStarland are cleaned & tested against any defects, including save battery.

Pokemon Emerald is compatible with all domestic and international Gameboy Advance systems.

Pokemon Emerald takes place over land and sea and pits you against the Team Aqua and Team Magma from Saphire and Ruby. This time around, Pokemon will show off their moves prior to battle, perhaps as a sort of taunt. Nintendo also added some new options to the game. A new Battle Frontier area has you play through seven big battles. The Battle Dome places you in a tournament in which only three Pokemon can participate. The Battle Tube has you select from three entrances and attempt to make your way to a goal.

Veterans of Pokemon Ruby and Sapphire will recognize a lot of the locations in Pokemon Emerald, but many elements within the game have changed, the most exciting of which is the addition of the Battle Frontier. The locations and frequency of Pokemon are different, and you may even encounter a new Gym Leader in your journeys.