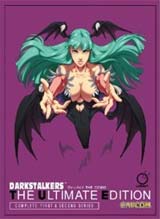 The Darkstalkers! Morrigan, Demitri, Felicia, Donovan, Victor, Talbain, and more battle it out for control of the night! Darkstalkers: The Ultimate Edition collects all of UDON's original comics adapting and inspired by the fan-favourite Darkstalkers video game series in one massive, oversized-volume!In the world on Darkstalkers, the fate of the world has taken a bleak and ominous turn. Slowly and steadily inhuman and supernatural characters have awoken and are roaming the earth. Vampires, zombies, ghosts, and succubae torment the mortal world—when not engaging in vicious struggles for power amongst themselves!

Created by CAPCOM, Darkstalkers is dark reflection of the Street Fighter video games, a surreal and supernatural fighting game with fan-favourite characters that have gone on to star in other CAPCOM games, including the smash-hit Marvel vs. Capcom 3!