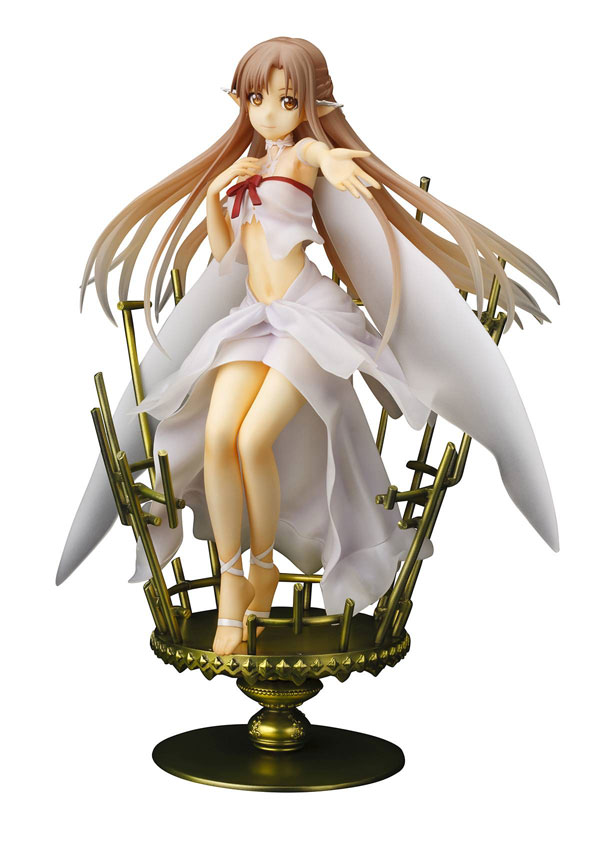 The next beautiful AniStatue from Kotobukiya comes from Sword Art Online, a Japanese light novel series by Reki Kawahara with illustrations by Abec that's been adapted into manga, anime, and a video game. Returning in a new form with a woodland themed alter ego to match her friend Leafa is the main female protagonist Asuna, as portrayed in the Fairy Dance (Alfheim Online) story arc.

The Knights of the Blood Oath clan sub-leader seems to float gracefully in a beautiful golden base, just lightly touching it with the tips of her toes. The elfin girl wears a diaphanous white dress that reveals her midriff and long legs, while its long back elements float in the breeze along with her long hair.

Asuna touches one hand to her chest while she reaches out toward you, all the while piercing you with her light brown eyes and shy smile! Every part of her evokes a feeling of softness and beauty from the flowing lines of her clothing to her cute pointed ears.

Sculpted by Shou Kojima, Asuna -Fairy Dance- is over 8 1/2 inches tall (1/8 scale) as she floats inside her broken cage-like display base. Asuna fans will definitely need to add this version to their collections, and she's the perfect companion to the previously released Leafa -Fairy Dance- Ani*Statue!