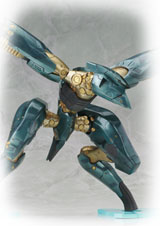 Coming to you directly from Metal Gear Solid 4 Guns of the Patriots comes Kotobukiya's latest model kit from the series, METAL GEAR RAY! The first Metal Gear Solid game was released on PlayStation in 1998 and featured stealth action as directed by Hideo Kojima. A massive commercial success, "MGS" has gone on to include sequels and stories told through several other media. Some of the coolest things about the series are the Metal Gears themselves, walking tanks equipped with heavy weaponry.

Designed by Yoji Shinkawa, RAY is unique in that it has no nuclear armaments and is instead designed to combat other Gears (especially the variety of REX knockoffs created after Shadow Moses). The new model kit, produced under the supervision of Shinkawa himself, perfectly captures the mecha's iconic appearance with its somewhat humanoid bipedal shape for enhanced maneuverability and hunting prowess. Designed for combat on land and at sea the RAY hides missile launchers, Gatling guns, and its signature water jet cutter under its sleek form, which you can assemble with the kit's 700 individual pieces.

The completed kit features multiple points of articulation for posing options and is compatible with Kotobukiya's Flying Base Neo and other modeling support goods bases (sold separately). Standing nearly 8 1/2 inches tall (1/100 scale), the Gear was sculpted by Katsuhiko Hori and even comes with mini figure characters like Solid Snake! Your other Gears had better watch out, because RAY is the perfect addition to your Metal Gear Solid collection.