A KOTOBUKIYA import! Ikaruga two-player go! Kotobukiya is proud to present a new version of the second player unit from the shooting game Ikaruga (first released by Treasure in arcades in 2001 and then subsequently on Dreamcast, GameCube, and Xbox Live): GINKEI BLACK! 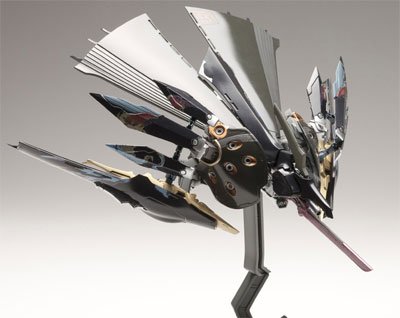 A ship belonging to mercenary Kagari, the Ginkei is equipped with the same polarity-shifting capabilities as the Ikaruga despite its very different design. A ship of sails and shield around a central weapons platform, the Ginkei is another unique craft unlike anything else you've ever seen, and now you can build your own! This new version of the model kit is comprised of approximately 200 pre-colored plastic parts in black and gray (with a multitude of colored accents) requiring glue for assembly, and is recommended for advanced modelers.

Once built the Ginkei is over 6 inches tall (1/144 scale) on its cool broken urban landscape display base. The attack ship looks great displayed on its own or next to the original Ginkei or any of the other previously released Ikaruga model kits!