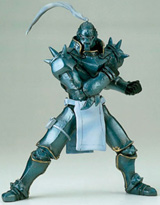 After the death of their mother, Edward & Alphonse attempted to use the forbidden science of human alchemy in a failed attempt to resurrect their lost parent. The alchemy carried a heavy price, as Edward lost his foot, and Alphonse sacrificed his entire physical body. In exchange for his own right arm, Ed is able to save his brother's soul inside of a huge suit of armor. Years later, Ed (now with two mechanical limbs) and Al (still trapped in the armor) leave their childhood home in search of any information on the fabled Philosopher's stone, in hopes that it will allow them to regain their original bodies. Ed's natural talent for alchemy becomes legendary, and he is soon known everywhere as the "Fullmetal Alchemist."

The popular Full Metal Alchemist manga (published monthly in Shonen Gangan Magazine) and anime (51 episodes and counting) is headed to the USA soon, with the anime airing on Cartoon Network starting in November 2004. Coinciding with the launch of the series is this release of the main characters as trading arts mini figures.

This set includes all four figures: The heroic Edward Elric, his young brother, the metallic Alphonse Elric, the Flame Alchemist Roy Mustang, and Winry Rockbell, friend of the Elric brothers, and the mechanic that keeps their armor in working order. These articulated figures stand 3-5" tall, and feature fantastic detail.